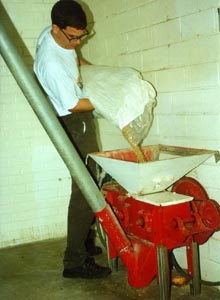 Here the malted barley is cracked open (not floured) to allow full hydration of the starchy kernel during the mash. We use only barley malt in all of our beers – except, of course, the HefeWeizen which includes 50% wheat malt. There are no cheapening adjunct grains or sugars added at any time. The grist is augured from the mill into the hopper where it awaits mashing in. 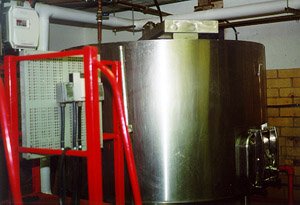 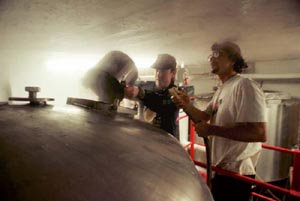 Beer is a careful balance between malty sweetness and hop bitterness. It is in the kettle during a 1.5 to 2 hour boil that a beer’s hop character is produced. Hop flowers (normally pressed into pellets) are added at various times during the boil to produce bitterness, hop flavor, and hop aroma. Some beers such as our Pilz and Pale Ale are balanced to accentuate hop character. In our Marzen/Oaktoberfest malt character predominates. In our HefeWeizen hop character is likewise subdued to allow the complex flavors and aromas produced during its unique fermentation to come to the fore.

After the boil the bitter wort is sent to a fermentation tank. However, it must first be cooled to a temperature suitable for yeast. This is done by passing the wort through a heat exchanger where it is cooled against counter flowing cold water. The resulting hot water is collected in a tank to be used in a subsequent brew while the resulting cool wort is sent to a fermenter. 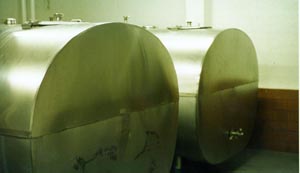 These are our 1,500 gal fermentation tanks. This is where the yeast do their work. Yeast eat the sugar and amino acids in the wort and produce carbon dioxide, ethanol and more of themselves.

Brewer’s yeast are like any domesticated plant or animal. That is, they have been carefully selected over hundreds of years to exhibit those characters that the brewers most desired. For beer, that means that they give a relatively “clean” flavor without the sour and off-flavors made by wild yeast. There are basically two broad categories of brewer’s yeast – ale yeast and lager yeast. There are many different strains within these two categories. At Live Oak we use three different strains of yeast for our four beers. We use a lager yeast in the Pilz and the Marzen, an ale yeast in the Pale Ale and a very special ale yeast in the HefeWeizen. Ale yeast tend to give a more complex flavor to beer. Thus, ales exhibit a bit of fruitiness and sometimes a even a buttery note in their flavor and aroma. They ferment best at temperatures around 60 – 70°F. You might pick out a hint of fruitiness in the nose of our Pale Ale.

Conversely, lager yeast have been selected to give an extremely clean flavor to beer – you might say “no flavor”. Lager yeast ferment at cooler temperatures (45 – 55°F) than ale yeast. This is thought to play a role in their relatively clean flavor profile. Lager yeast make the subtle flavor of the malt and delicate hop character all the more accessible in lager beers. The typical German beer is a lager. Our Pilz and Marzen are excellent examples of the subtle complexity that can be achieved with hops and malt in lager beers.

At the far end of the yeast flavor scale lay the HefeWeizen yeast. These yeast were cultivated by Bavarian brewers for their extreme flavor contribution in wheat beers. The traditional HefeWeizen yeast produces fruity aromatic compounds called esters – principally the banana ester, isoamyl acetate. It also makes a host of phenolic compounds which are responsible for the clove, vanilla, cinnamon and smoky flavors. There are no fruits or spices added to a Bavarian-style HefeWeizen, despite what your tastebuds may be telling you. Together with the light tart flavor of wheat malt, these flavors combine to make one of the most complex yet refreshing and drinkable beers in the world.

Fermentation takes place over the course of about one week – lagers take more, ales take less time. When most of the sugar has been consumed by the yeast the beer is pumped back to our conditioning tanks. 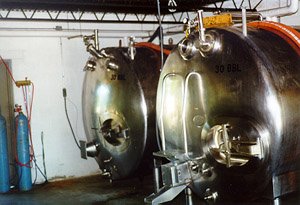 During conditioning or lagering the beers mature to their final condition. The beer is slowly cooled to about 34°F and remains at that temperature for at least four weeks for the lagers and about a ten days for the ales. Depending on the style of beer some flavors may emerge, some mellow, but the most obvious difference is that the beer becomes carbonated by carbon dioxide still evolving from the yeast. 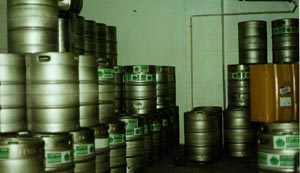 Beer is kegged directly out of the conditioning tanks without pasteurization. Beer tastes best that way but must be consumed fresh. That is a luxury only possible with locally produced beers.